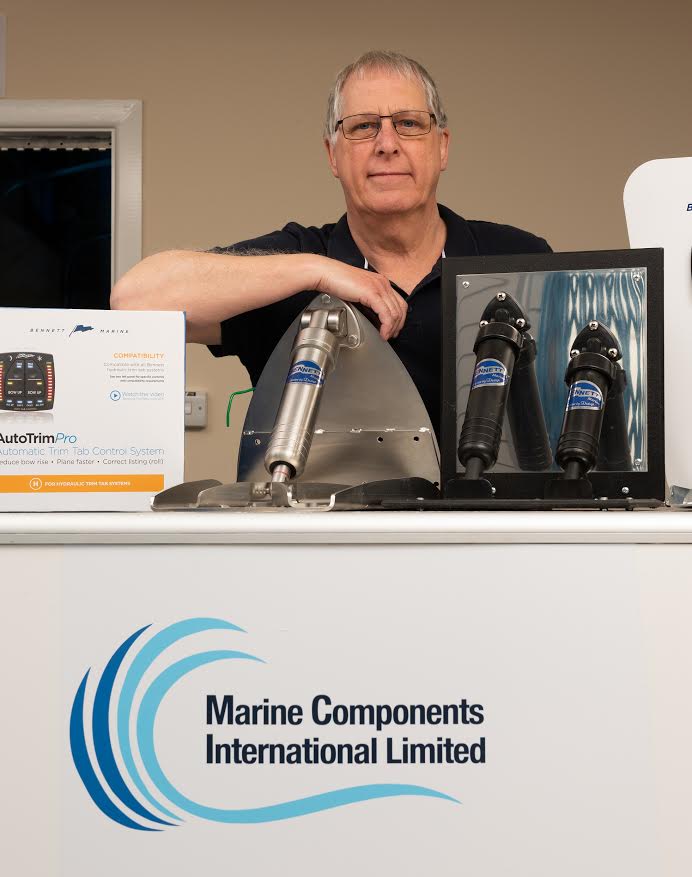 US-Bennett Marine was – the pioneer of adjustable trim tabs and introduced joystick control at an early stage of product development. Its European distributor Andy Scott MD of Poole based Marine Components International will be showcasing the Bennett trim tabs at this year’s METs trade fair in November in the UK Pavilion.

Andy says Bennett’s founder Charles Bennett was inspired by aircraft design, where the ailerons were joystick controlled. In the late 60s, he applied the same principle to his tabs; push forward on the stick to take the nose down, pull back to bring it up and nudge it to either side to eliminate a list. Powerboats often lean into the wind at speed due to pressure differentials on each side of the bow, so the controller was intuitive to use.

However, the joystick was phased out more than 25 years ago in favour of rocker switches. Meanwhile, the indicator dials continued to be mounted as a separate unit elsewhere on the dashboard. Now, partly in response to the requirements of Yamaha Motor Europe N.V., the joystick is back.

In total, Bennett Marine has launched three new control systems for its range of adjustable electric and hydraulic trim tabs. One is a joystick control for BOLT Electric Trim Tabs, plus 2 new ALL-IN-ONE rocker switch control with LED tab position indication for BOLT Electric and Hydraulic trim tabs. All three have an auto-retract function when the engine is switched off.

In developing these new controllers, the company had the boat builder and retrofit enthusiast very much in mind. The emphasis is on quick and easy installation, with retrofitting assisted by using the same footprint as the original controllers, so there is no need to recut the facia. The original four-stud fixing bolts on the ALL-IN-ONE controls have also been replaced with a single lock nut whilst the cable connectors are all plug-and-play.

“The relay module used to be in a separate box, but is now incorporated in the control unit,” he told Boating Business. “This means you can run the cables directly from the tab motor to the controller, without an additional connection to the relay. This greatly simplifies installation as well as minimising the installation time.”

The products themselves were launched at the METS trade show in 2019 and have now begun shipping as full production returns to the factory in Florida. The only exception is the ALL-IN-ONE control for hydraulic tabs, which is expected to ship at the end of September.

All three controls have been designed to be attractive, easy to use, and simple to install.